You are at:Home»Latest»On the One Road to Celtic’s First 9IAR, Part 2 – The Phil Coles Buses and The ‘Celtic Choir’

MIKE MAHER who now lives in New Zealand, faithfully followed Celtic home and away during the club’s first 9IAR. We asked him to write about what it was like supporting the club during these glory years. What follows is a truly wonderful account. You can almost hear the songs being sung on those supporters buses in the 1960s and 70s…

Part 1 of this series appeared on The Celtic Star last night and you can catch up here, or by using the link below. Part 2 follows on with the final instalment tomorrow.

On the One Road to Celtic’s First 9IAR, Part 1 – The Supporters Bus | The Celtic Star https://t.co/wyxDLUbuhM

“On the One Road” Celtic’s First 9IAR by Mike Maher

For the rest of that season I was pretty much an away game regular on that bus. I was making first time visits to most grounds in the First Division – Brockville, East End Park, Easter Road, Annfield, Cappielow, Rugby Park and others.

The game itself was only a part of the whole match day experience. The banter on the bus, passing through parts of the country I had not seen before, seeing the large fleet of buses in the parking area afterwards, many with their own distinctive club badge and then the journey home discussing the game and the other results of the day.

I had found the ideal way to spend a Saturday.

By the time the following season came along John had moved to Whifflet and had joined the St Marys Club so for that glorious season most of my away travels were with that club. I did miss one game however. On a very wet February afternoon I was on a half full bus waiting our departure for the game at Annfield against Stirling Albion. John and his father had not turned up and some folk were doubting if the game would go ahead in view of the heavy rain.

Somebody went into the Big Tree Bar and used their phone to contact Celtic Park. He came back onto the bus to announce the game was off. We all got off the bus. Rather than go home I decided to get my football fix for the day by going to Broomfield. I had several school friends who were Airdrie fans so I joined them on the terracing that day.

They were surprised to see me as they had been listening to the radio to see if their game might be postponed and could not recall hearing that the Celtic game was off. I was now having some doubts myself and these were confirmed when the Half Time Scoreboard advised that Stirling Albion were leading Celtic 1-0. I was annoyed to say the least. 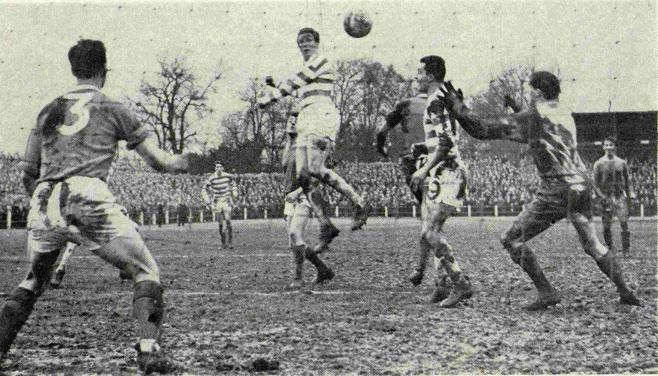 Not only would Celtic have to play without me (they did get a second half equaliser) but that was the only domestic game I missed that entire season and indeed would the only one I did not attend for the period from January 1966 to December 1971. On the bus the following Saturday for the trip to Love Street I discovered that the person at Celtic Park answering the call as to whether the game was on or not presumed the enquirer was meaning the reserve game at Parkhead between the same clubs and that had indeed been called off!

Those were great times to be following the Bhoys and many of my school mates were in the growing band of followers. For home games a large squad of us would gather together in the Celtic End where we considered ourselves to be an important part of the “Celtic Choir”.

This was in the days when the singing was more spontaneous and did not have to have a DJ leading it. The Jungle was not then the place for singing it would become later (although it never matched the Celtic End at its peak).

As more of us were travelling to away games too it was not always possible to go together on the same supporters’ bus as most of us were not actual members. Accordingly during the 1967/68 season many of us started using a famous method of getting to away games- Phil Cole’s Bus. 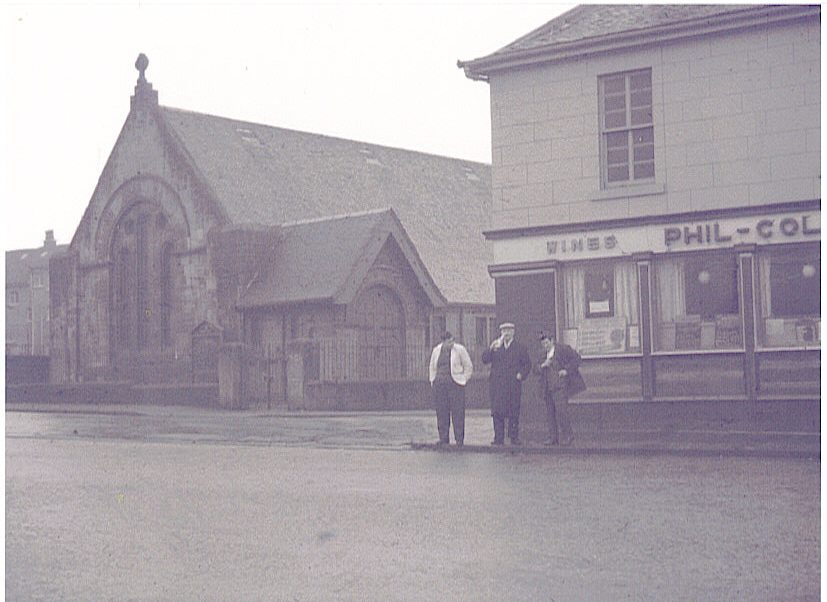 Phil Coles was a Coatbridge and Celtic institution. It was different from the other Supporters Club in those days as it did not have then an organised membership. There were the regulars as well as many like us who used it for certain games.

It also seemed to be a “last chance saloon” for some who had become not exactly welcomed on other buses.

Unlike most of the other clubs drink was not banned on the bus. In fact it seemed almost compulsory. Despite that I never felt in any way concerned on my travels. The language could certainly be industrial to say the least but as long as you were open and not “up yourself” things generally were fine.

In contrast to the Club’s reputation Phil himself appeared to me anyway to be a nice quiet gentleman. By that time I don’t think he any longer owned the pub that bore his name but he would be there every Saturday organising the buses. And yes that is plural. 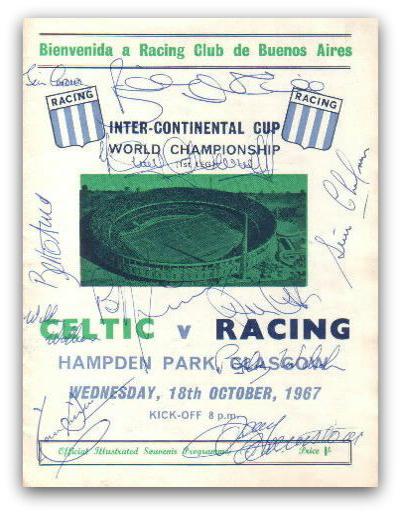 For lots of games several double deckers would leave the pub. One game I recall in particular was the “World Championship” game with Racing Club at Hampden. On that occasion there would have been at least 30 buses lining up in the street ready to pick up passengers from outside the pub.

I was waiting my turn to board when Phil himself came up to me and told me that he was going on the bus just about to leave and I was in charge of the next one! I was still at school and did not fancy having to control a bus with around 60 or so hyped up fans on board nearly all of whom were older – and bigger – than me. However I did my best to ensure no one was left behind after the game and took the collection for the driver.

Ticket games were not as common then but they did happen. No matter how scarce they were tickets always seemed to be available through Phil Coles. If that was the case I would nip down to the pub during lunch hour and ask for tickets at the little side door that was used for off sales. On a couple of occasions Phil would tell me just to come to his flat and pick up tickets there as that was nearer the school.

And no matter the game Phil Coles would always have a bus going. That was particularly helpful for midweek trips to Pittodrie. That kind of fixture was difficult for many other Clubs to justify the cost of running a bus. One such occasion was in April 1968. Celtic were trailing Rangers narrowly in the League race and an away win at Aberdeen was vital. 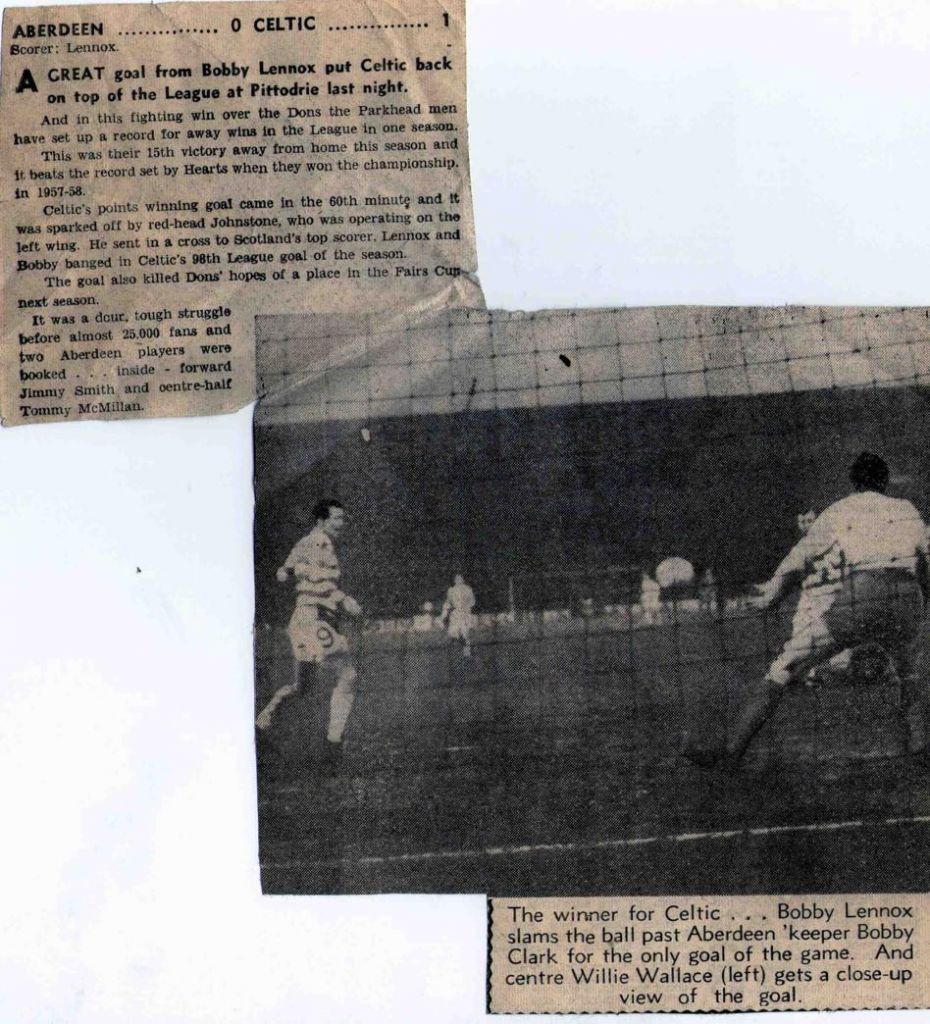 As the game fell during the Easter break about eight of us from the school met at Phil Coles for the 2.30pm departure. Although under pressure for most of the game a Bobby Lennox goal clinched the points and it was a happy trip back down the road.

Most of the adult passengers had of course gone for a few pints before the bus left the Granite City and soon tried to grab some sleep. With no school the next day we had no concerns so decided to pass the hours with a sing song.

The usual Celtic songs were sung before we moved on to the more “political” ones. To make it more interesting it was decided they should be sung in chronological order. Thus we started with the likes of O’Donnell Abu and the Minstrel Boy before working our way through The Boys of Wexford, The Bold Men, Robert Emmett, The Foggy Dew, Johnston’s Motor Car, the Boys from the County Cork, The Old Alarm Clock and so on up to Sean South with the occasional argument along the way such as whether Kevin Barry was before The Boys of Kilmichael. Considering that none of us did any formal studying of Irish History at school you can see that travelling on the Supporters buses was an education in more ways than one!

That is not to say that the Phil Coles regulars needed us schoolboys to get the singing going. There were plenty others capable of that. The usual format was John Sullivan initiating the proceedings with A Graidh Mo Chroi and everyone joining in. This was especially the case if passing through an area that was deemed to be particularly loyalist although I was never sure quite how that categorising was worked out. It was also through songs on this bus that I learned about the 7-1 game which was played just a bit before my time.