You are at:Home»Latest»Ange delighted with signing of ‘good fit’ Ally Johnston

Ange Postecoglou has said that he is delighted with the latest piece of business from the Scottish Champions as Ally Johnston signs for Celtic. The Canadian defender has been confirmed for an undisclosed fee, signing on a five-year deal following the conclusion of his World Cup campaign.

Speaking to the Celtic website, Ange said that they had identified Johnston as a transfer target from an early point.

“I’m delighted. He’s someone we identified pretty early on as somebody we think can add to our club.

“He’s had an interesting career path where he’s had to work very hard to get to where he is, and we’re very happy to conclude the deal and knowing he was going to the World Cup, I think he performed well there as well.

“He’s really keen to come across and take the next step in his career, and I think he’ll be a great fit in our dressing-room, and he’ll definitely add something to our football as well. 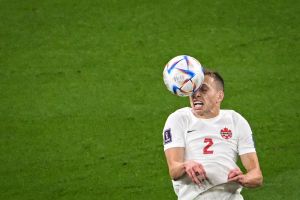 “He’s predominantly played on the right side of defence, at centre-back or right-back. He’s very good technically, very good going forward and also a really strong competitor and he doesn’t mind the physical aspects of the game, and as I said, I think he’ll add something to our club.”

Johnston arrives from CF Montreal on a five-year deal. Having left Nashville for CF Montreal in December last year, Johnston went on to make 39 appearances and scoring four goals. He has also been capped 33 times by Canada, scoring one goal.

The defender will compete with Anthony Ralston and Josip Juranovic for the right-back jersey, although the latter is likely to attract interest in the window from teams from Spain and England as he continues to impress at the World Cup.