You are at:Home»Latest»Celtic flop set to depart AC Milan for just £3m

Celtic flop Diego Laxalt looks set  to depart AC Milan for just £3m (3,5m Euros) with Dynamo Moscow set  to sign the 28-year-old. He was initially seen as a replacement for Boli Bolingoli after his COVID antics but never really proved himself to be good enough nor worth a permanent move to Glasgow.

According to Calciomercato via Di Marzio, the player will travel to Russia ahead of sealing a permanent switch from AC Milan after a poor season in Glasgow’s East End. The Uruguayan International arrived with much anticipation to help Celtic continue their domestic dominance; however, he was underwhelming to say the least and the club rejected the opportunity to sign him on a cut-price deal. 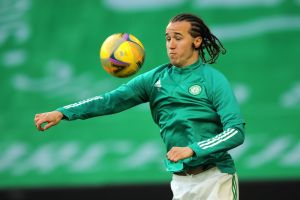 The AC Milan fullback joined on deadline day from Celtic’s Europa League Group H rivals AC Milan and immediately started the 2-0 home defeat to Rangers. His performances to begin with added a much needed pace and steel on the left hand side, something that has been missing since Kieran Tierney left for Arsenal. However, he was criticised for poor performances since November as Greg Taylor won his place in the side again. He came back into the side under John Kennedy but was hopeless in the defeat against Rangers. He subsequently returned to Milan, where he was expected to be moved on.

He was a bit of a loose canon on the left flank, he would get forward but his final ball was poor and often he wouldn’t track back. Maybe he was lost to the lack of tactics under Neil Lennon and there is a decent player there but for the best part, we didn’t get to see it.