You are at:Home»Latest»The Mayhem Of Football Hooliganism In The 1980s & That CS Gas Incident At Easter Road

The 1980s was a crazy time on the terraces in British football. In Scotland, Aberdeen became the first club to have a firm as the casual scene took hold across the country. The raucous era had already seen full scale pitch riots at Hampden Park and Aberdeen casuals beating a Hibs fan to a comatose state, yet the violence reached new heights in 1985 when Hibernian’s mobs, The Capital City Service and Hibs Baby Crew, ambushed Aberdeen with Molotov cocktails on Princes Street (Edinburgh), to knock the Aberdeen Soccer Casuals off their perch as the leading hooligan group in the country.

The casuals scene never took off in the same way at Celtic Park and though there was a hooligan group named the Celtic Soccer Crew, they regularly found themselves marginalised on the terraces by the wider support and were often subject to chants of ‘Casuals get to feck, casuals, casuals get to feck’. However, the Celtic Soccer Crew did leave an indelible mark on the Scottish game in 1987 with one of the biggest incidents of the decade.

Celtic were playing Hibernian at Easter Road on 28 November and were just a point behind Hearts in the race for the title. A massive away support of over 10,000 travelled to the capital, which meant that the crowd far exceeded the 23,500 capacity attendance quoted, and kick off was delayed by 13 minutes. Once everybody had safely taken to their spot on the terraces, Celtic turned on the style with a sublime performance. Their phenomenal start to the game was rewarded in the 21st minute as Paul McStay and Frank McAvennie combined brilliantly, with the latter shooting past Andy Goram from 12 yards.

Andy Walker had a great opportunity to double Celtic’s advantage before the break, but Celtic headed into the half time interval with a solitary goal advantage and a huge roar of approval from their adoring fans. During the break, according to one Celtic Soccer Crew member, there was discussion among some Celtic hooligans about when they would deploy a weapon on the unsuspecting Hibs fans. The story goes that a CS gas cannister had been acquired by a member of the firm during a recent trip to watch Celtic against Borussia Dortmund in the UEFA Cup. The said member had supplied the hooligan group with the missile that morning and the Celtic Soccer Crew would have seen an opportunity to earn a major coup against one of Britain’s most feared hooligan outfits.

The second half begun without incident. Pat Bonner made a string of superb saves to keep Hibernian’s Paul Kane at bay, but proceedings were about to be adjourned in the 62nd minute. A loud boom rang out and gas swept along the East terrace of Easter Road. Suddenly, people started spilling on to the pitch to take refuge and eyes began to burn and stream throughout the ground. The Celtic Soccer Crew had fired a CS gas cannister, which they later claimed was a smoke bomb, into the Hibs support housed closest to the away end. A cloud of panic hung over the stadium as supporters were treated on the field and 45 fans were taken to hospital. Fortunately, there were no serious injuries and the worst of the casualties was a 77-year old man, who had broken his ribs in the chaos that followed the explosion of the cannister. 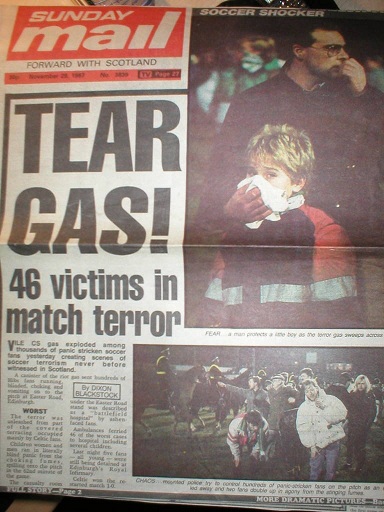 The match was delayed for almost 20 minutes and upon the restart, the flow of the game had gone. The contest simmered out to a vital 1-0 victory for the Celts, which put them back to the top of the table as Hearts had lost 3-2 at Ibrox that afternoon.

Half a dozen people were arrested over the incident, with one man being held in prison on remand for 16 weeks prior to a high court appearance. By the time of the trial in February 1988, two twin brothers, who had been at the scene, were also arrested and due to stand before the judges. The trial lasted a few days before the supplier and thrower of the gas cannister received substantial sentences, whilst the other six accused walked free.

The incident remains something that most Celtic fans look back on with a sense of embarrassment.