You are at:Home»Latest»Reports: Celtic Veteran Linked With Summer Move to Huddersfield

Craig Gordon is a target for English Championship side Huddersfield, according to the Daily Record. The 37-year-old is out of contract at the end of the season and despite Celtic blocking any potential move for Gordon in January, they are yet to offer him a new deal.

Gordon has played second fiddle to Fraser Forster since the Englishman returned on loan from Southampton and now a move to Huddersfield could offer him the game time that he’s after.

Hearts were reportedly interested in Gordon in January but Neil Lennon blocked the move as it may leave him with Scott Bain should Forster get injured as Doohan and Hazard are both out on loan.

Celtic will be waiting until the future of Fraser Forster is clearer before deciding what to do regarding Gordon’s contract. Forster has recovered his best form since returning North with some massive saves in the Europa League as well as domestic duty standing out. 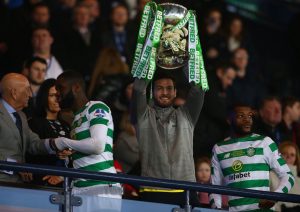 Celtic will be hoping to sign Forster on a permanent basis, should the 31-year-old be willing to accept a pay-cut.

Gordon joined Celtic on a free transfer having spent nearly two years without a club following a near career-ending injury while at Sunderland. In his time at the club he has won an incredible 13 major honours.