You are at:Home»Latest»Southampton eye bargain deal for Celtic’s Ryan Christie

Ryan Christie will be watched by Southampton this summer with the English side casting their eye over the attacking midfielder. The 26-year-old will be playing for Scotland at the Euros, with games against England, Croatia and Czech Republic with Ralph Hasenhüttl’s Saints eyeing another deal with Celtic.

The St Mary’s outfit have signed Fraser Forster, Victor Wanyama, Virgil Van Dijk and Stuart Armstrong being poached from Glasgow’s East End and The Scottish Sun are reporting that Saints are considering a move for Ryan Christie.

Christie’s Celtic contract has a year remaining meaning he is free to sign a pre-contract in the January/. Christie is definitely one that would prosper under a new manager but he may fancy a move to England and follow the example of Stuart Armstrong. 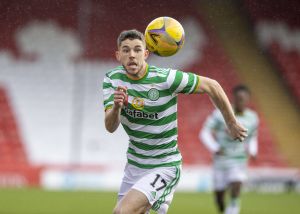 Christie contributed 14 assists and 7 goals this season but came under criticism from the support for his tendency to shoot from unfavourable positions. This was likely due to a lack of coaching at Lennoxtown, something that has hampered his progression since Brendan Rodgers left for Leicester City.

Signed from ICT in 2015, Christie continued his progression being loaned back to the Highlands then spending eighteen months at Pittodrie under Derek McInnes. He appeared to bulk up and add consistency to his game, meaning he was ready to be integrated into the Celtic team or be sold on.

Christie has been a consistent performer in recent seasons but doubts remain as to whether he is committed to remaining at Celtic or is eyeing a move to England.